On October 28th, 2020, Amazon further expanded its global presence (again!) and not only launched a new storefront with Amazon Sweden, but also the new Amazon affiliate program!

Amazon.se was launched to support shoppers in Sweden. This makes the 19th independent Amazon storefront worldwide now and the seventh in Europe (Amazon.co.uk, Amazon.fr, Amazon.de, Amazon.it, Amazon.es, Amazon.nl being the other six). 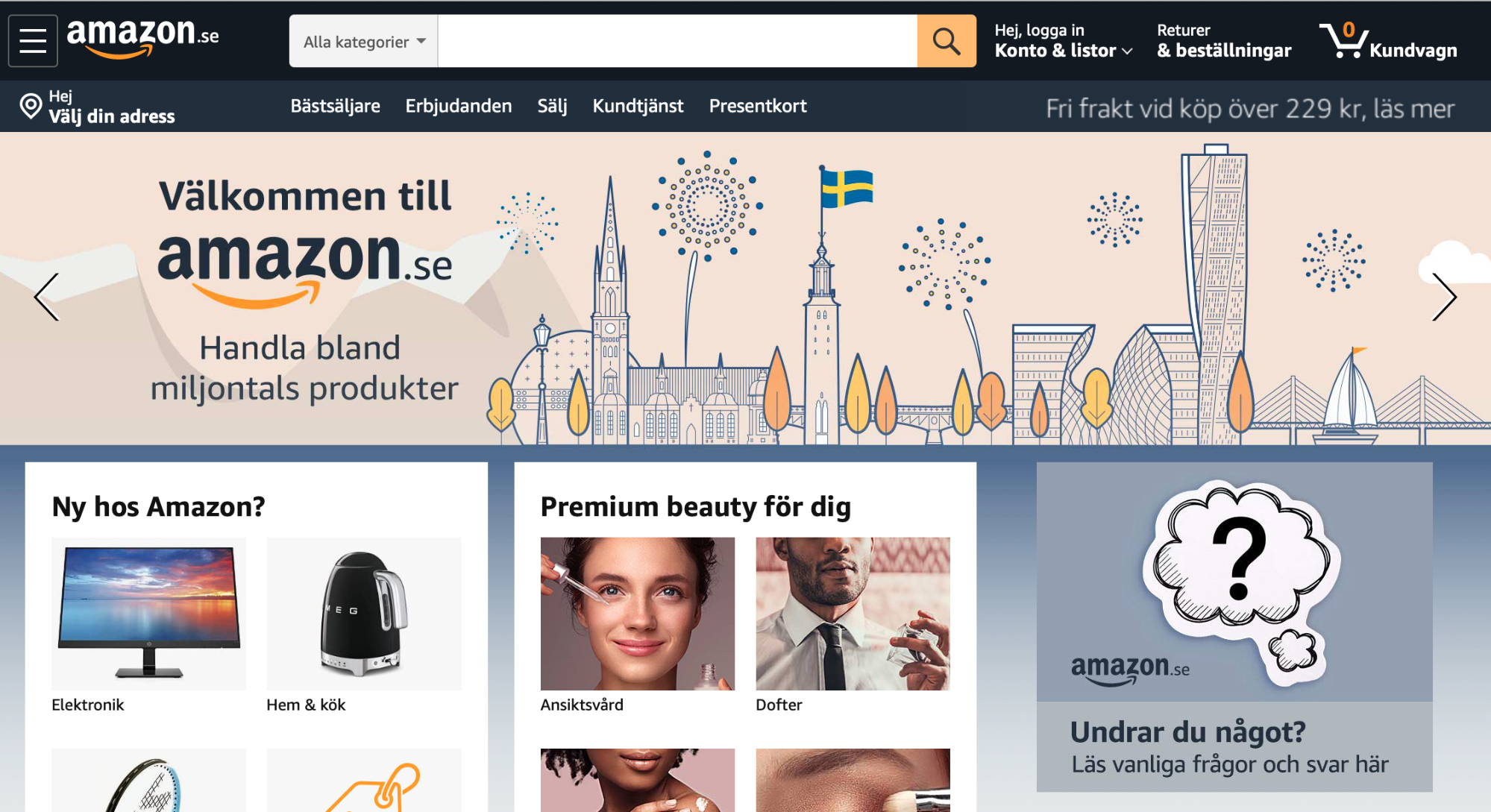 In August of 2020, Amazon shared that it was moving forward in launching another region-specific storefront in Sweden, the Nordic region’s largest economy. The global pandemic seems to be a major push for Amazon to accelerate the rollout of online shopping marketplaces as Sweden’s 10 million sparsely populated inhabitants have come to rely on e-commerce as a necessity. While the launch was rumored to be accelerated the plans by Amazon to make a presence in Sweden has been a long time in the making.

Previously Amazon.se redirected to the Amazon Germany storefront (Amazon.de) and Swedes often ordered from here or the British Amazon store (Amazon.co.uk) but were often shown a limited selection of products and incurred high delivery fees.

The new Amazon.se storefront will feature over 150 million products, across 30 categories, including tens of thousands from Swedish businesses, and is focused exclusively on Swedish shoppers. Following it’s playbook, Amazon Sweden is offering free delivery on orders over 229 Swedish krona (~ $25). The postal company PostNord will handle the majority of deliveries.

While Amazon has been building momentum launching new regional storefronts over the last couple of years, this launch got off to a bad start. Most notably, Amazon launched the site showing the Argentinian flag instead of the Swedish flag and their reliance on auto-translating listings lead to mistranslated product descriptions with both hilarious and scary mistakes. 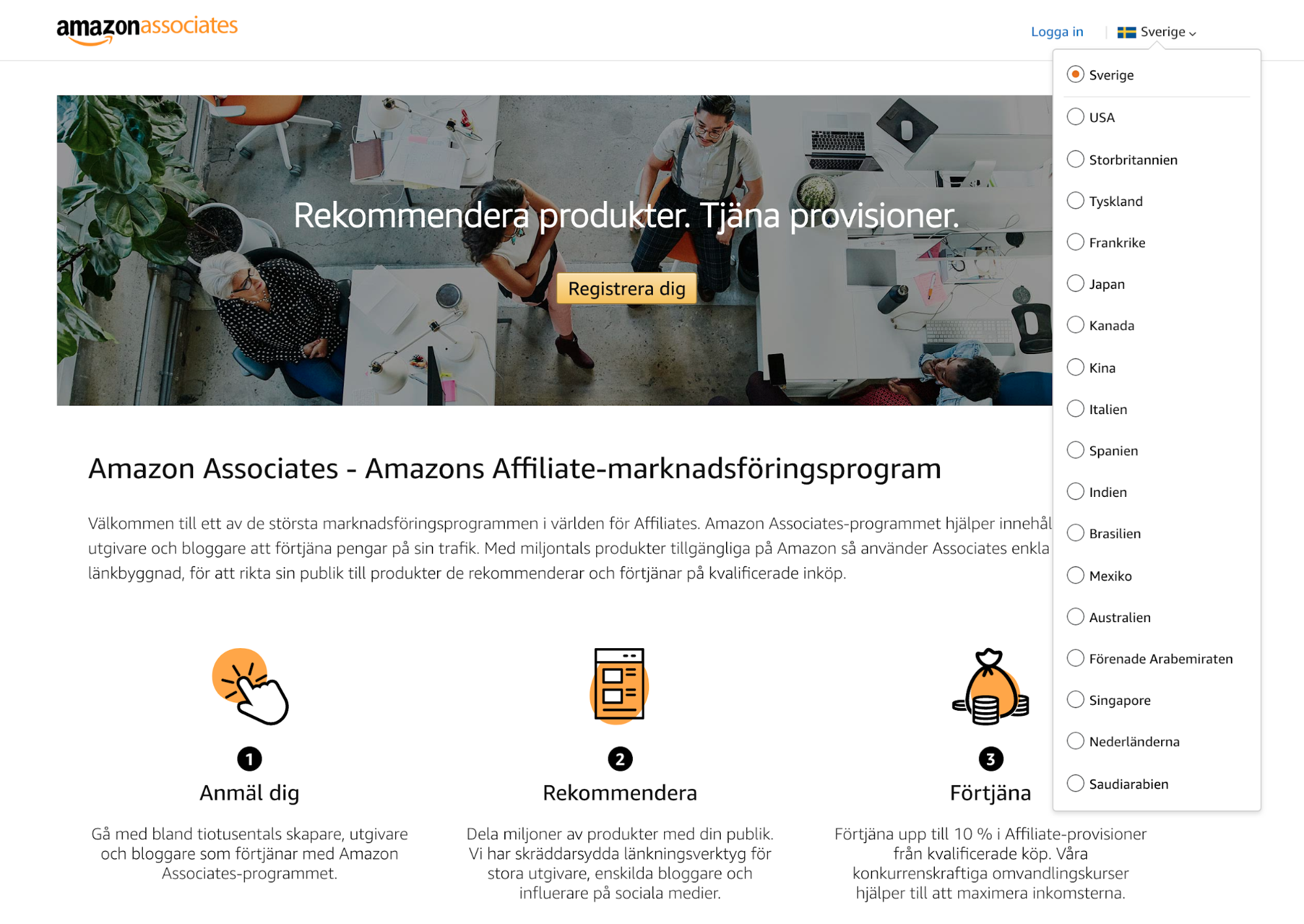 The signup and login for the Amazon.se affiliate program can be found at https://affiliate-program.amazon.se/ or by clicking on the country flag/name from any of the other Amazon Associates Central dashboards.

Most important, the signup for the Amazon Sweden affiliate program appears to be open to creators, publishers, and affiliates worldwide (unlike the Amazon Netherlands affiliate program for example) though there are minor limitations on what countries they can payout affiliate commissions to (more on that later).

The signup process takes the same four-step process the other Amazon affiliate programs follow, which includes providing Account Information, sharing the sites and social media channels you plan to share Amazon affiliate links from, providing some information about your profile (that includes questions about site/channel, size, focus topics, traffic generation methods, etc.) and finally presenting you with an affiliate tracking ID specific for you and the Amazon.se affiliate program. 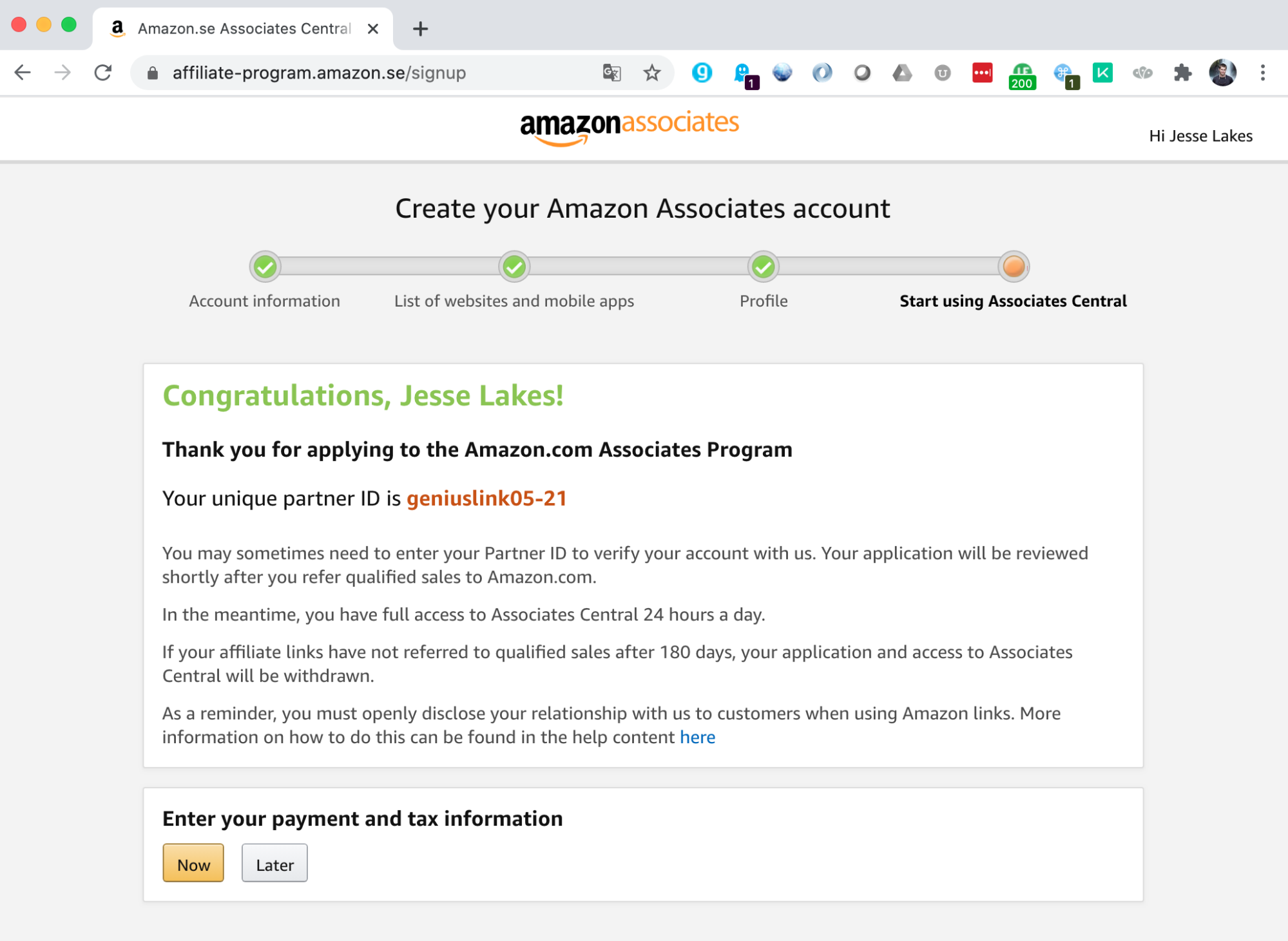 Just like the other Amazon affiliate programs worldwide, Amazon reviews your account after you’ve generated three “qualified” sales and your account will be auto expired if you aren’t able to do this within 180 days. On this note, we do not recommend signing up for the Amazon Sweden affiliate program if you aren’t getting at least 100 clicks per month from Sweden, as your time would likely be best spent elsewhere.

The signup process shouldn’t take you more than 20 minutes, and if this isn’t your first rodeo you should be able to complete it in about 10 minutes max.

Amazon.se affiliate payouts are limited to direct deposit (where some of the older programs also offer gift cards or paper checks) and allow for payments to nearly 50 different countries including the US (but not Canada or Australia). If your bank account resides in one of the countries that aren’t covered by the options provided by Amazon then you’ll find that Payoneer is awesome for solving the problem of actually getting your commissions into your bank account. (Our love for Payoneer, and how to use Payoneer, is elaborated on here) 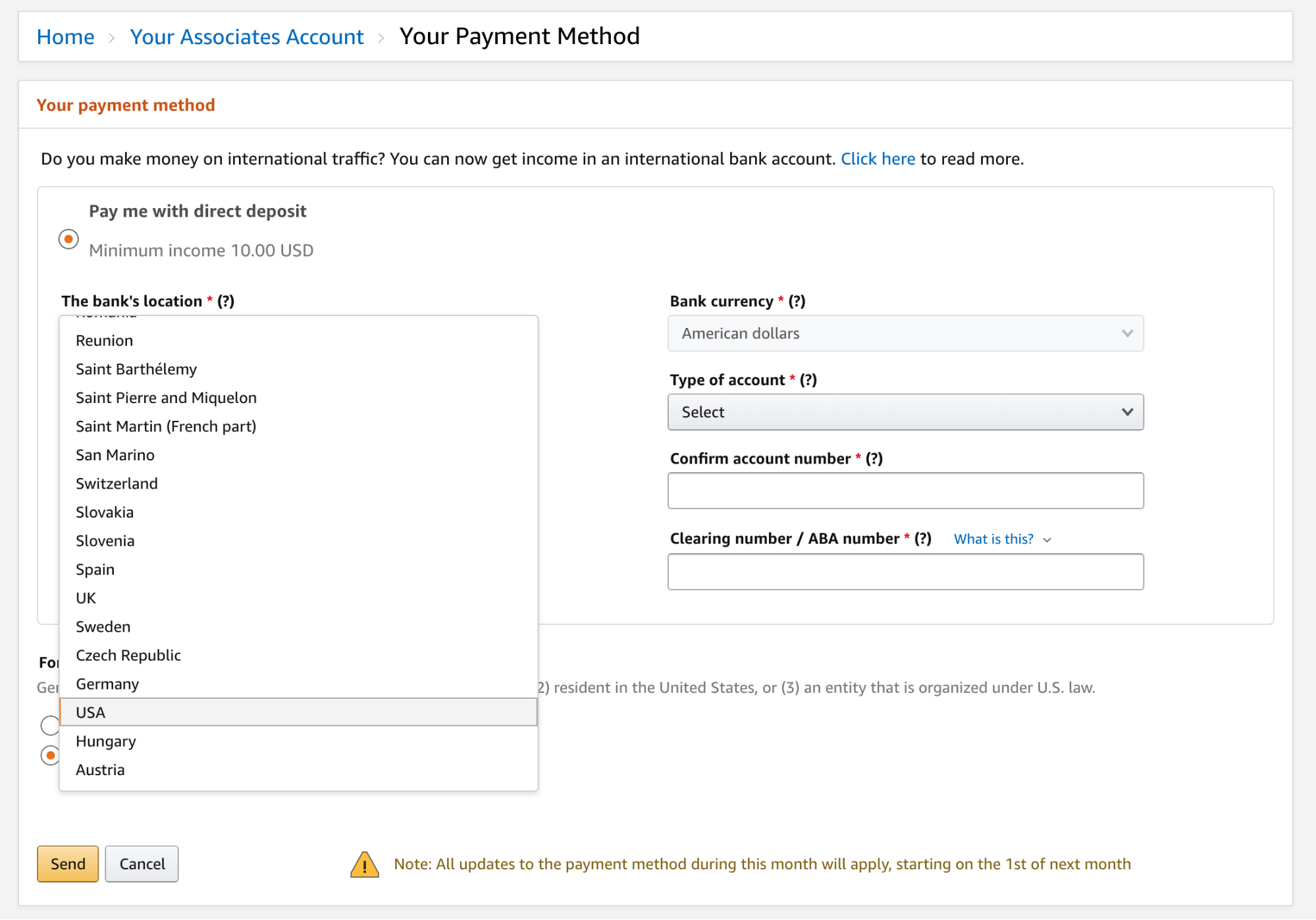 The Amazon.se affiliate program commission rates follow the “Fixed Fee for Specific Product Categories” format that Amazon.com adopted in March of 2017, and is not currently using the Qualified / Non-Qualified purchase format that the European Amazon Associates programs are now using.

The published commission rates for the launch of the Amazon Sweden affiliate program (October 28th, 2020) are as follows:

How To Identify an Amazon.se Affiliate Link

Affiliate links for Amazon Sweden follow the same format as Amazon affiliate programs across Europe and the Middle East with the key of “tag=” followed by a string of characters that end with “-21”. For example geniuslink05-21. 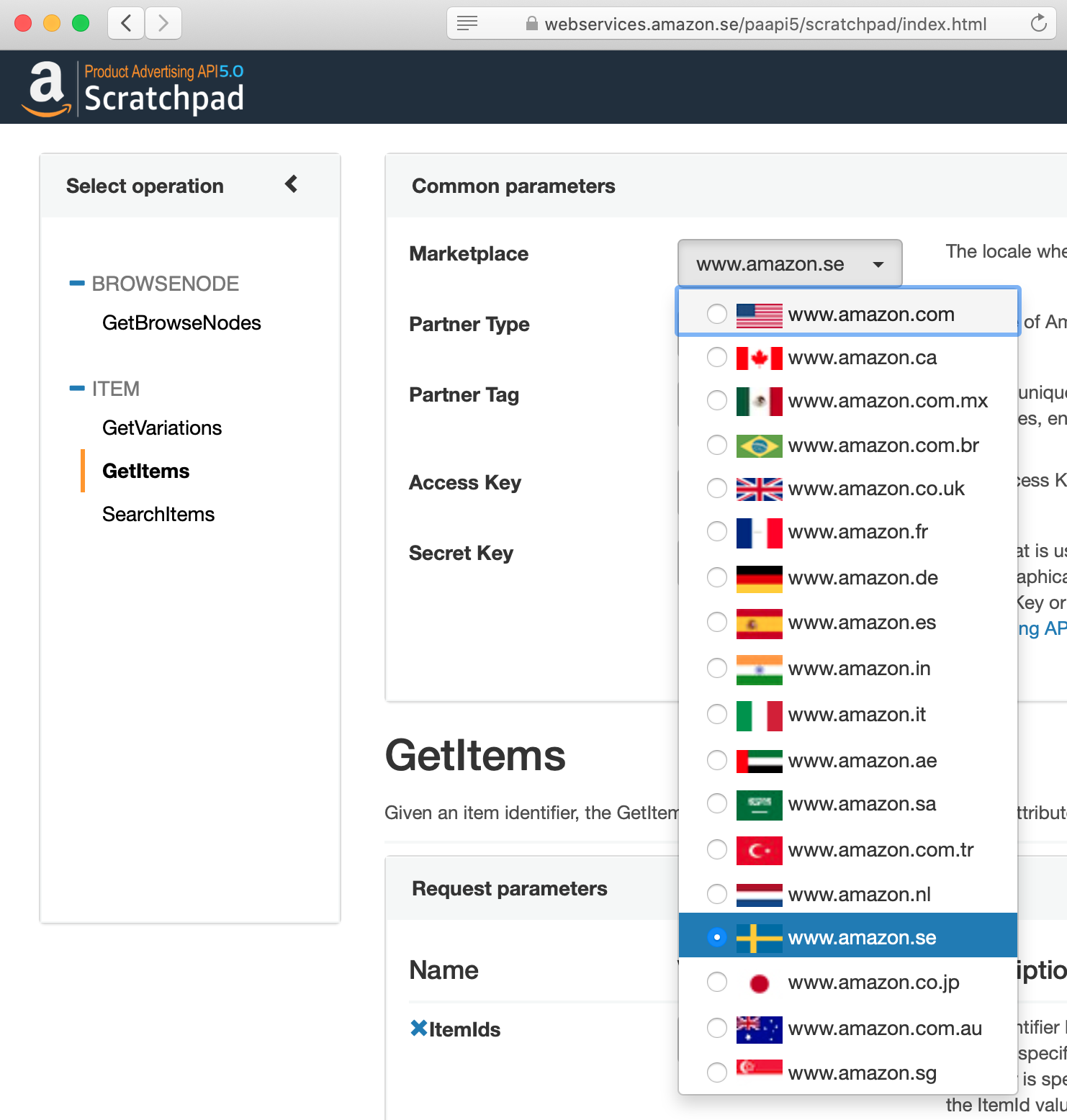 Just like with many of the other new Associate’s programs (India, Mexico, Australia, Brazil, Turkey, United Arab Emirates, Singapore, the Netherlands, and Saudi Arabia) Amazon’s affiliate link translation tool, OneLink, does not support Amazon.se. Therefore, if you are using OneLink, then the Amazon.se links posted to your site won’t be localized for any international traffic, and when Amazon.com (or elsewhere) links are clicked from Sweden, they won’t redirect to Amazon.se.

Support for a new Amazon storefront comes in two pieces with Geniuslink. The first being “auto-affiliation”, the process of taking a raw link and converting it into an affiliate link. This means you only need to add your affiliate tracking ID into the Geniuslink dashboard once and all of your links running through our service will be affiliated. Auto-affiliation support for the Amazon.se Associates affiliate programs is fully functional so you can add your Amazon Sweden affiliate tracking ID now.

The second stage of support on Geniuslink is our industry-leading link translation. However, this requires access to the Amazon Product Advertising API (PA API). So while the PA API endpoint is available for the Amazon.se storefront, we are still working with our contacts to get suitable access so we can provide the auto-magic link translation for any Amazon product link to the correct product in the Amazon.se store for clicks originating from Sweden. We are hopeful we’ll get this figured out soon.

However, if you can’t wait either and already see significant traffic from Sweden, then you may want to take the power into your own hands with an “Advanced” link built in the Geniuslink dashboard. By creating a rule for Sweden traffic and manually providing an Amazon.se URL as the destination, you ensure that your visitors from Sweden are getting the best treatment possible and that you’re earning your affiliate commissions. 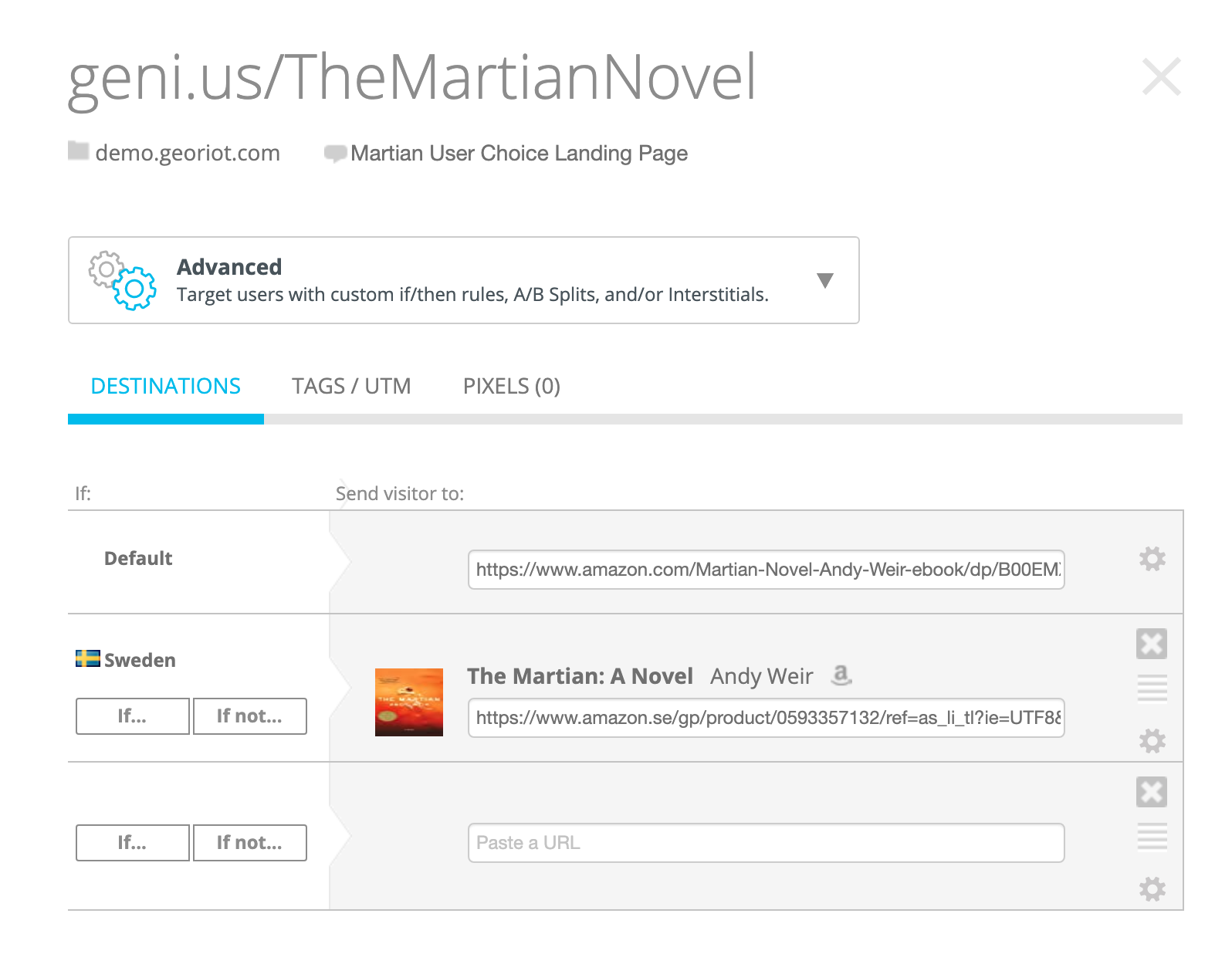 Once again, Amazon’s proven that international expansion is important and that offering regionally focused storefronts is the way to do it. It’s exciting to see Amazon not ignore their affiliate program in the process of expanding its international affiliate footprint. We enjoy watching them grow because it generates opportunities for content creators around the world as well.

It’s always fun to see what Amazon cooks up next! It will be interesting to witness what other parts of the world become available to affiliate marketers interested in generating revenue from recommending quality products.

Please let us know in the comments below any questions you have or any observations we may have missed.