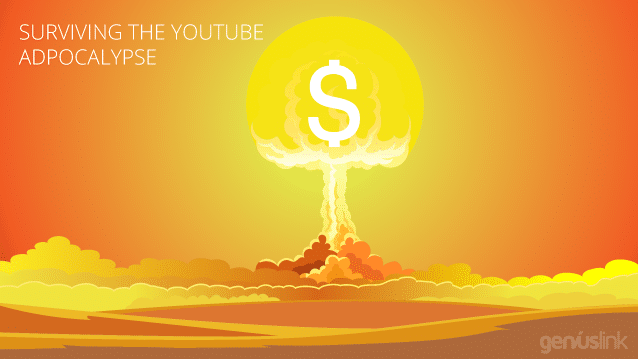 It’s been a few months since the infamous YouTube “Adpocalypse” began heating up. Since then, a boycott of YouTube by major brands has forced YouTube to re-adjust their monetization rules, which now has certain creators feeling the burn.

The Hazardous Effects of Brand Fallout

In addition to outright demonetization, what’s most notable about the “Adpocalypse” is that videos are now losing ad revenue in less obvious ways. In April, YouTube introduced new safeguards which allowed marketers to opt out of running ads against certain videos by category. Brands can now decide to remove ads from videos that feature “tragedy and conflict”, “sensitive social issues”, “sexually suggestive content”, and more.

While these rules were designed to help protect advertisers, the reality has been broad sweeping demonetization of content, suppression of content, and a lot of confused creators who are starting to wonder who the “You” in YouTube really is referring to.

When this conflict all began, YouTube published a blog where they explained that they want creators to “express themselves while earning revenue.” They wrote:

“There’s a difference between the free expression that lives on YouTube and the content that brands have told us they want to advertise against. Our advertiser-friendly content policies set the tone for which videos can earn revenue, ensuring that ads only appear where they should. To make sure we apply this process fairly, we also give creators the chance to appeal if they feel any of their videos have been unfairly demonetized. We take these steps because advertiser confidence is critical to the financial success of our creators.”

At first, this may seem like an effort to balance the needs of sponsors and advertisers and those of creators, but it’s also become increasingly clear that YouTube is not-so-subtly nudging creators only to make content that is palatable to major advertisers, or else suffer financially.

Like most technologies these days, an algorithm is largely responsible for carrying out these guidelines. YouTube acknowledges the automated process isn’t perfect and offers a manual review process. This allows users to appeal videos marked “Not suitable for all advertisers” and a chance of gaining advertisements. However, it’s this time-sucking review process that’s doubling the headaches for some channels.

A recent update from YouTube reassures that an updated algorithm will result in millions of videos becoming fully monetized instead of being listed as not suitable for all advertisers. YouTube has said that through the process of creators appealing their demonetized videos, the technology has been “trained and improved” to help better figure out what’s actually unsuitable for advertisers and what’s okay.

Unfortunately, no matter how accurate these new algorithms are supposed to be, YouTube Partnership monetization can still be a foreboding black box for content producers. This is causing many to raise the question of “Is it worth the risk?”

These days, many creators agree that the old methods of content monetization simply aren’t worth the effort. For new people who are interested in starting a channel to provide additional income, it’s become even less viable as the changes to YouTube’s monetization rules require all channels to have at least 10,000 views before they’re offered the chance to start running ads on their content.

So what’s the best way to start, and continue, earning consistent income from your content now?

With an over-saturated content space, where everyone is trying to “go viral” and advertising fees are declining, it’s becoming clear that it’s not enough to simply produce videos and pray that you get enough views to start monetizing content. To be successful on YouTube now, it pays (literally) to start being a professional marketer and build a strong community that will help support you.

One of the most straightforward ways for creators to support themselves now is to simply ask for help from their community. San Francisco based Patreon has emerged as an alternative model for raising funds for YouTubers who are unhappy with the current state of affairs. Patreon lets viewers make monthly and ongoing ‘pledges’ that benefit creators directly. Their website claims that they have so far sent over $150M to creators.

Florian Wittig, 30, is one of the producers of the Great War channel. Since 2014, the channel has published nearly 500 educational videos about World War I, each week posting three to four new episodes. Unfortunately, because their videos regularly deal with the topic of war, 75 percent of their videos have been flagged for manual review.

In a recent video, Wittig asked viewers to support the channel through Patreon. Because of YouTube’s new ad regulations, many creators like Florian are also turning to Patreon to fund their projects as a better source of independent revenue.

“We made it clear a while ago that Patreon is the main reason why we can continue to make this show,” Wittig says.

While Patreon can be a great source of revenue for creators with a generous audience, the service charges a five percent fee from the money that is raised for the creators, and due to its donation-based model, is not always a guaranteed income.

Although Patreon has been a great source of support for many creators over the last few years, the service also puts creators at the mercy of an intermediary, which may raise concerns for those who are already tired of dealing with YouTube.

One alternative that may soon solve this problem is the open-source browser Brave, which is introducing their “Basic Attention Token” system. This is a type of utility token based on the Ethereum technology that can also be used as a form of “credit” between advertisers, publishers, and users in a new, blockchain-based digital advertising and services platform.

Brave users have a choice, they can either distribute contributions based on the time they spend viewing videos or by ‘pinning’ a set amount to their favorite creator. Brendan Eich, CEO of Brave Software Inc. explains why they chose to extend the reward system to YouTubers:

“We see big platforms exploiting the new generation of content creators who generate so much value for the platform owners, yet increasingly face sudden drops in ad revenues and even demonetization.”

By emphasizing the need to connect viewers and YouTube content creators, he adds, “Brave reconnects users directly to content creators.” Again, this system relies on a donation-based model, but with a more direct connection with the audience meaning (hopefully) less bureaucracy and more revenue.

YouTube affiliate marketing is one of the most popular and scalable solutions you can invest your time in. YouTube’s audience is only going to grow in the coming years, and because of the lower competition found in niche circles, you won’t find it as hard to start getting viewers. If you’re already a serious content creator on YouTube, there’s a good chance you have at least one affiliate offer somewhere in one of your videos. YouTube is so massively popular among creators and consumers that it just doesn’t make any sense not to. However, it’s probably worth making a distinction here between casual marketers and professional affiliate marketers.

In the first category are content creators who happen to place the occasional affiliate link in their videos. For them, affiliate marketing is one more way for them to make money, but not the only way, as these folks often make enough money from ad views, multi-channel-network agreements, and even attempts to diversify into more conventional gigs like music or acting (Looking at you Jake Paul).

In the second category are channels that exist solely to earn affiliate commissions. For such content creators, all content development revolves around its ability to earn affiliate commissions. This is by far one of the easiest and most reliable ways to start monetizing your videos, and an absolute must if you aren’t collecting income from other areas!

What’s great about this approach, and what makes it so accessible for new YouTubers, is that they don’t need to be famous off-the-bat to start earning money. There doesn’t need to be a viral “hit” as long as you understand your niche and provide solid content for it. By figuring out a niche where your videos could be valuable, you can effectively produce content that acts as a double-edged sword to simultaneously entertain and engage your audience, while still marketing a good deal to them.

This means that while a new or existing channel might not have enough views to run YouTube ads in its content, it can still make good money (if it ranks well) because:

On the other hand, a “reaction video” may be shared heavily but won’t earn as much money because neither the traffic nor the offers are accurately targeted. Many large channels are simply relying on increasing their upload rate or resorting to “clickbait” titles in order to drive more views and make up lost revenue for demonetized videos when in actuality it’s becoming safer to distance yourself from that model entirely.

What do you need to do to become a successful affiliate marketer on YouTube?

Geniuslink was created to help solve this problem and to help our users succeed at becoming the best online marketers they can be. By using an intelligent geni.us link in your YouTube videos, you guarantee that your viewers are always sent to their local storefront, which means improved conversions, and happier customers!

Ultimately, it all comes down to smarter marketing tactics. To succeed on YouTube in the post-“Adpocalypse”, you’ll want to start thinking of ways to produce content that you can monetize more reliably or ways to make it even easier for your audience to support you. So figure out your niche, produce awesome targeted content, and optimize your links to make your clicks as valuable as possible. You may be surprised by how easy it is to survive in this scary new “brand-friendly” wasteland if you’re smart about it!