In the last 24 hours, since Amazon.com announced reductions in their commission rates, we’ve been talking to a number of our clients and are following countless conversations on social media. With both of these, two questions keep coming up:

1/ Is Amazon getting rid of, or even care about, their affiliate program?

These are great questions and while I can answer both in a tweet or Facebook comment — “Yes keep using Amazon, no I don’t think their affiliate program is going anywhere” — I think a good response requires more than 240 characters due to the nuances.

While certainly painful, especially with the global pandemic and economic collapse happening simultaneously, this is not the first time Amazon has made major cuts to their affiliate rates.

While changes in the Amazon.com affiliate program’s commission rates are common (we’ve counted nearly 50 in the last decade), Amazon tends to make major changes in the April-May time frame. And in the last four years has made similar cuts that have sparked similar levels of uproar, but from our perspective, often don’t have any major impact on the usage of the program.

For historical comparison:
April 1, 2017: The beloved volume-based commission structure (which paid up to 8.5% across most categories) was completely removed in favor of the fixed fee, category-based payouts where many publishers saw a significant drop in commissions. 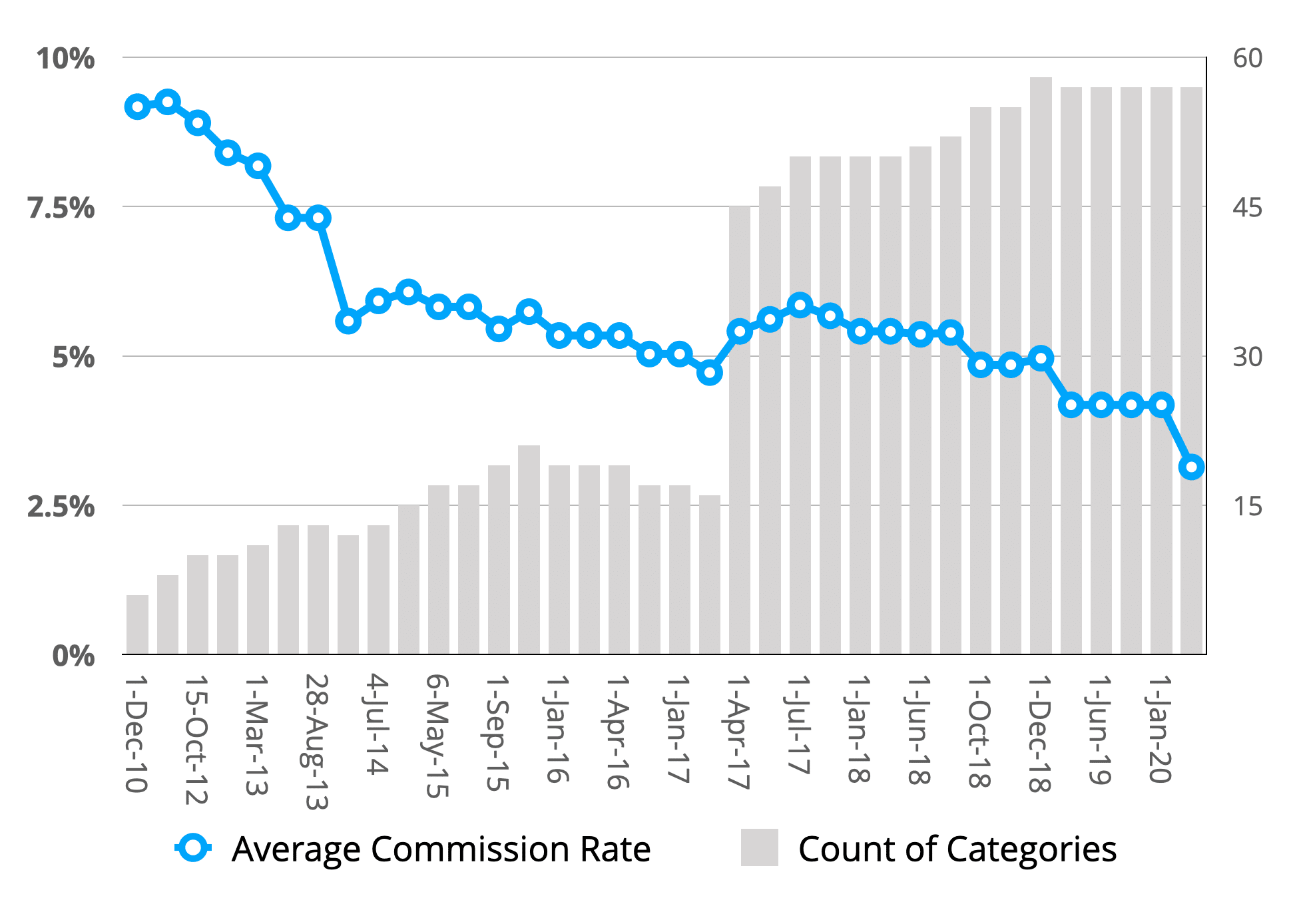 You can see how these had little to no impact on the general usage of the Amazon affiliate program based on both Google Trends and BuiltWith.

It should also be noted that Amazon appears to be constantly experimenting with new commissioning models as evidenced by the rollout of the Direct / Indirect Qualifying Purchases model in the five European programs last Spring. This model would pay out a larger commission for hitting certain volumes but payout a significantly lower commission (in the 1% range) for halo purchases or using search-based links.

Further, with some quick research, we’ve found that Amazon’s affiliate publishers have been complaining about declining commission rates and threatening to leave the program for a very long time. For example, I found these quotes, in a forum from 2004, nearly sixteen years ago.

“They lowered the commission rate yet again. If this keeps up we’re going to have to PAY AMZN for putting their links on our sites!”

As I alluded to in my recent blog – End of the Amazon Associates Era?, and presentation at Affiliate Summit West 2020, Amazon has a fiduciary responsibility to its shareholders and their affiliate program is very mature. While it sucks for those affected, we shouldn’t be surprised by a continued trend of reduced commission rates over time.

Finally, while it’s been rumored the changes are permanent (and we should treat them that way) I think Amazon is having a major crunch right now due to unprecedented demand and needs to pull the levers it has to reduce that demand. It seems reducing the incentive to send traffic to Amazon is one of those levers.

This comment from “timwhite” in the recent Engadget article announcing the rate cuts sums it up nicely in my opinion:

I think this is more an indicator that Amazon is having a hard time keeping up with demand in those categories. It’s almost impossible to get a lot of those products right now, so by cutting commission Amazon is telling its affiliates to push things that it has an abundance of supply. They don’t really need influencers and bloggers running around trying to sell people toilet paper.

While I do foresee decreases in commissions continuing overtime, I don’t think Amazon will ever cut the program. With regard to any evidence that the Amazon Associates program isn’t going anywhere and is still a priority for Amazon, I can think of two data points.

Take Amazon Australia’s launch compared to Amazon UAE, Amazon Singapore and Amazon Netherlands for example. We first noticed that the Amazon.com.au storefront had an Associates program in early December of 2017, but the program didn’t actually launch until May / June of 2018. In comparison, in May of 2019, the Souq.com website was rebranded as Amazon.ae and had their affiliate program rolled out at the same time. In October of 2019 the Amazon Singapore store launched with an affiliate program. And most recently, in March of this year, Amazon Netherlands launched it’s marketplace and affiliate program at the same time.

From my time growing the iTunes Affiliate Program as the global program manager, I can tell you firsthand that it takes a ton of work, across a lot of teams, to launch a new affiliate program, especially in tandem of launching a new storefront.  This is work I don’t think Amazon would do if they were planning on sunsetting the affiliate program in the foreseeable future.

Amazon is also actively hiring for new roles for its affiliate program. I took a quick peek at Amazon.jobs, dropped in the keywords “affiliate marketing associates” and got +30 results with one of them being posted just a few days ago. With so much demand in other parts of the business, I don’t think Amazon would waste time hiring if it was planning on sunsetting the program.

That all being said, I think what we are seeing is the Amazon Associates program evolving. Again, for context, the program is going to have its 24th birthday in July. It’s a very mature program, to say the least.

A few ways we are seeing the Amazon affiliate program evolve include:

I think the recent news of Amazon removing Skimlinks and Sovrn Commerce (fka Viglink) from their affiliate program was so they could have a more direct relationship with their publishers.  I think this is just the continuation of a process they started many years ago when they first started reducing how much Skimlinks and Viglink could use their program after the affiliate aggregators were caught in the middle of some actions by bad actors in the space.

I think the recent removal of some big named publishers was actually in part because those publishers likely had special arrangements with Amazon that appeared to pay fees in excess of the commissions for using their affiliate program. My guess is that the “experiment” wasn’t yielding the results that Amazon wanted or had run its course.

I won’t deny the timing of the commission rate reduction, removal of Skimlinks and Sovrn Commerce, and news of the big publishers, while in the midst of this pandemic and economic chaos, is weird.

However, spending a moment to think about it, and pulling from my experiences running a massive affiliate program, I think that these three things were likely in the works for months, well before the pandemic, as they take significant time to plan. It just so happens the timing was horrible and makes it look like the sky is falling.

Finally, one other major way I’m currently seeing Amazon’s affiliate program evolve is their Advertising group rolling out an external attribution program. This program appears to be geared towards its sellers to give them visibility into their external marketing that drives sales to Amazon for their product. This is a fairly common practice where sellers have traditionally used the Associate’s program, but are more concerned about the efficacy of their marketing programs instead of the actual commissions. I think we may see a mandate for brands that sell on Amazon not being allowed to use the affiliate program (and earn commissions) but instead be required to use the attribution program instead.

To quickly recap, I think the upcoming rate cut sucks but is not a surprise. It’s business as normal for a mature affiliate program, but with horrible timing.

I think the program will continue to evolve and some of those changes will likely be painful for some publishers and users of the Amazon affiliate program.

Simply put, I do not think Amazon cares less now or is planning to close its affiliate program.

I’ve spent the last 1,300 words answering the first question. Now, let me briefly answer why I do not think you should abandon the Amazon affiliate program. There are two simple points:

Lots of people still shop at Amazon. Amazon has 38% US ecommerce market share (compared to Walmart having about 5%), and there are estimated to be 100M Prime members in the US alone.

Any commission is better than no commission. Yes, 3% or 1% sucks compared to 8%, but I personally would rather earn something rather than nothing and nothing is what you earn when your shoppers abandon your affiliate links to buy the product on Amazon.

However, I also don’t think you should rely solely on Amazon’s affiliate program as that’s akin to putting all of your eggs in a single basket (and is very risky).

Rather, we strongly recommend you adopt a multi-retailer strategy. Using a tool, like Choice Pages, you can give your audience multiple purchase options in the same link so they can choose the retailer that is best for them. It can also help you diversify the affiliate programs you use and lessen your dependency on Amazon’s affiliate program. Further, you might even see that by providing multiple options boost conversions by helping your audience comparison shop (and will likely even increase your Amazon affiliate revenue to compensate for the lower commissions).