For many Twitch streamers, gaining Affiliate status is the first step to making a living from live streaming video games. It provides monetization opportunities and customization options that aren’t available to ordinary Twitch accounts. Savvy Twitch Affiliates can build on this momentum to increase their audience size and eventually become Twitch Partners, with even more monetization opportunities.

But it all starts with one broadcast, a handful of viewers, and you. Here’s what you need to know about the Twitch Affiliate program and how you can make it work for you.

What Is the Twitch Affiliate Program?

What Is the Difference Between a Twitch Affiliate and a Twitch Partner?

Here’s the reasoning from Twitch’s perspective: By paying their broadcasters money, Twitch encourages them to create more content and drive traffic to its platform. Affiliates are streamers that show promise at attracting a decent amount of traffic, while Partners have a demonstrated history of doing so. The flexibility and compensation differences reflect the volume of traffic Affiliates and Partners attract.

There are a lot of differences (big and small) in what Twitch provides Affiliates and Partners. Here’s a chart created by Twitch on their Joining the Affiliate Program page that goes into detail: 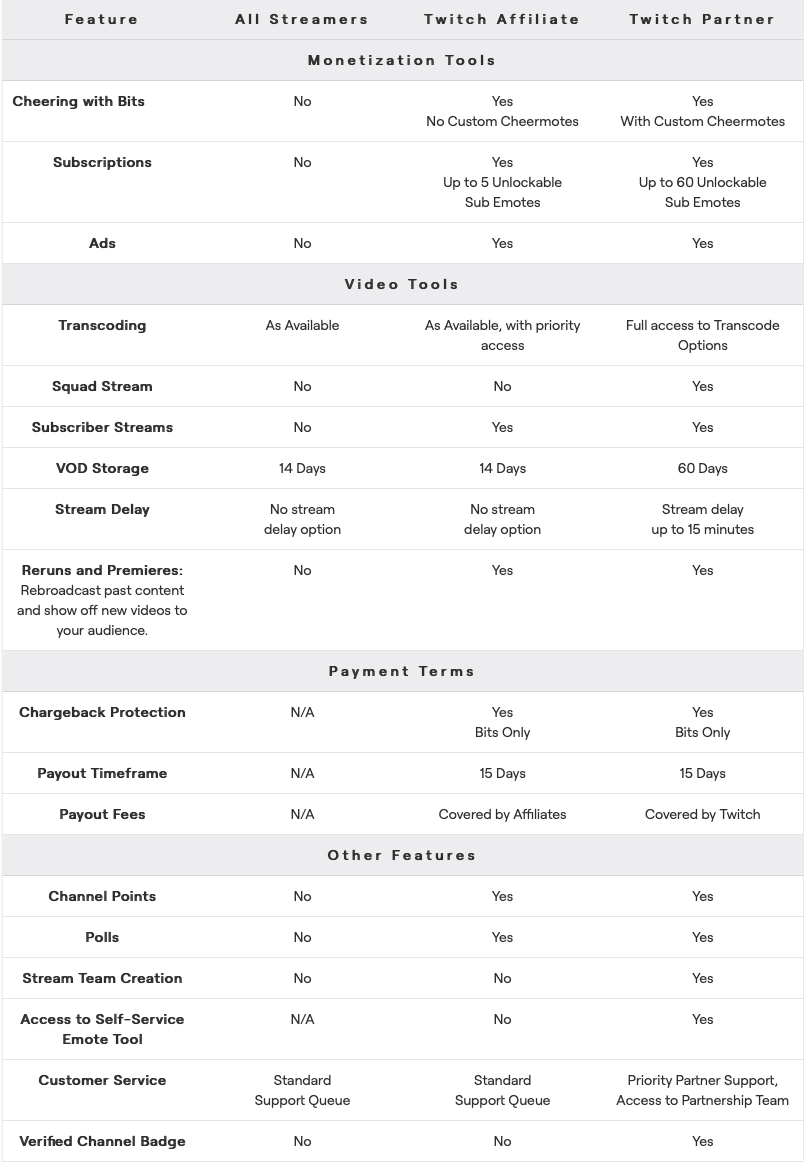 Should You Become a Twitch Affiliate?

One important caveat you should keep in mind is that by becoming an Affiliate, you are signing a contract with Twitch that gives them exclusive rights to your stream. According to the Twitch Affiliate Agreement (look at “2.2. Live Content Exclusivity”), your live stream can only appear on Twitch (i.e., you can’t use a service like Restream). Furthermore, you cannot repost your stream to other platforms until 24 hours after your live stream ends.

Another thing to consider is that you’re entering a crowded marketplace, and becoming an Affiliate isn’t a guarantee you’ll stand out. Community-led data analysis seems to indicate that Twitch doesn’t significantly prioritize promoting Affiliates over non-affiliates. In fact, the data gathered by Sullygnome, a Twitch data analysis website, shows that most Affiliates and even some Partners average between 0-5 average viewers.

So, becoming an Affiliate isn’t the golden ticket to becoming a Twitch millionaire. But it can be an essential step along the way (and an opportunity to make a couple of extra bucks and customize your stream).

How To Become a Twitch Affiliate

Twitch will invite you to become an Affiliate once you meet these four minimum requirements. You can view your progress towards becoming an Affiliate via the Twitch Achievements Tab under the “Path to Affiliate.”

Twitch sends out invitations via email, notification, and in your dashboard. You won’t miss it when your invitation comes.

How To Make Money as a Twitch Affiliate

Twitch’s Affiliate program provides three options for Affiliates to monetize their streams: subscriptions, ads, and bits. But the process of becoming an Affiliate allows you to try other monetization strategies that can make a big difference.

Make Money With Twitch as a Twitch Affiliate.

As an Affiliate, Twitch will give you a share of the money it earns from your views during your stream through subscriptions, ads, and engagement.

Subscriptions. There are four subscription tiers: $4.99, $9.99, $24.99, and a free Amazon Prime subscription. Every time a viewer subscribes to an Affiliate’s channel, the Affiliate gets a cut.
Ads. Affiliates earn a share of the revenue from ads run on their channel. Also, Affiliates have control over the length and frequency of ads in the Ads Manager.

Bits. When a user Cheers a channel, they use Bits, which are Twitch’s virtual currency. Affiliates earn one cent per Cheer in their channel.

Make Money as a Twitch Affiliate With Other Tools

As an Affiliate, the audience you create around your content is your most important asset. If you’re smart about it, you can both provide your audience value and introduce revenue streams independent of Twitch.

Affiliate marketing. Affiliate marketing is where you earn a commission for promoting a business or product to your audience using a unique link. For instance, you provide a recommendation for a mic to your audience using a unique link. When an audience member buys the mic you recommend via that link, you earn money. Amazon Associates is the easiest to start, but it’s best to do so once you have a decently sized audience because they require at least three quality purchases in the first 180 days for your account to remain in good standing. The end goal is to diversify your income streams, so you’re not so reliant on Twitch.

Patreon, Kofi, and others. You can ask your audience to support you directly through services like Patreon and Kofi. In exchange for their support, you can provide bonus content and extra benefits.

Merchandise. Once you have a strong brand, you can sell merchandise to your subscribers featuring your logo, in-jokes, and even audience-generated fan art.

How Does Twitch Affiliate Payout Work?

What Are Twitch Affiliate Benefits?

The main benefits of becoming a Twitch Affiliate are:

Is It Hard To Become a Twitch Affiliate?

Becoming a Twitch Affiliate requires quite a bit of hard work and months of work, but it is attainable for dedicated streamers. You need to prioritize constant, quality content and actively work to build an audience through many different social media platforms, not just Twitch.

What To Do Once You’re a Twitch Affiliate

Short answer: keep doing what you’re doing. Besides creating your custom emotes and setting up your monetization, your focus should remain on making your audience happy. To become an Affiliate, you must create good content for an engaged audience. Continue to do so, and you’ll be on your way to becoming a full-fledged Twitch Partner.